Aneurin “Nye” Bevan (15 November 1897 – 6 July 1960) was a Welsh Labour Party politician. Born into a working-class family in South Wales, he was the son of a coal miner. He left school at 14 and worked as a miner during his teens where he became involved in local union politics. He was named head of his Miners’ Lodge when aged 19, where he frequently railed against management. He joined the Labour Party and attended Central Labour College in London. On his return to South Wales he struggled to find work, remaining unemployed for nearly three years before gaining employment as a union official, which led to him becoming a leading figure in the 1926 general strike.

In 1928, Bevan won a seat on Monmouthshire County Council and was elected as the MP for Ebbw Vale the following year. In Parliament, he became a vocal critic of numerous other politicians from all parties, including Winston Churchill and David Lloyd George. His criticisms of Churchill and the Conservative government during the Second World War raised him to national prominence. 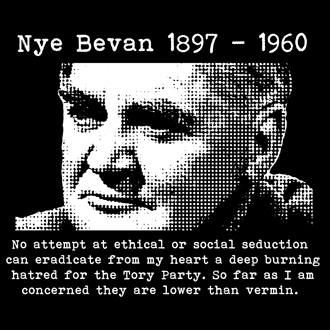 I think I would have got on well with him.

Feel free to say what you think Cancel reply

This site uses Akismet to reduce spam. Learn how your comment data is processed.